Today's spotlight is on Emmett. Emmett was not diagnosed prenatally but thanks to Texas Children's Hospital he is alive and well today! Emmett's Momma, Skylar tells his story below. 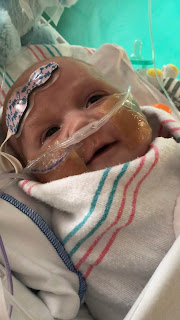 I was 16 when I got pregnant for the first time. Already scared of what the world may think of me being a teenage mom, I was scared to tell my mom because three days before I found out I was pregnant., he had a miscarriage of her own. I knew I needed to start doctor appointments to check and get the right care of the tiny growing human inside of me. Throughout the 9 months of my pregnancy, everything was great, we always got told he was looking perfect and growing just like he needed to be. He was breech so the doctor said I’d have to have a cesarean.

Everett was born on March 5th, 2018 at 8:23 am. He was a 6lbs 4.5oz and 19.5 inches long little boy. As I recovered from my c-section I mainly slept but never did they bring my little boy to me. They told me they were giving him a little bit of extra oxygen. Hours went by and he still wasn’t wheeled down to my room, so 8 hours after my surgery I got out of bed and walked to my wheelchair and was wheeled down to see Emmett. As I held him for the first time his oxygen saturation’s went up and we thought he was getting better. Over the night a nurse was watching him closely and knew something wasn’t right so the next morning they told me that my perfect little baby might have a congenital heart defect and that he was being transferred to Texas Children’s Hospital in Houston. Soon he left in an ambulance with the kangaroo crew. His Pops got to ride with him because the hospital wouldn’t release me because my blood count was low. So while he made his way to be treated almost 3 hours away from me, I had to stay in the hospital where he was supposed to be with me. 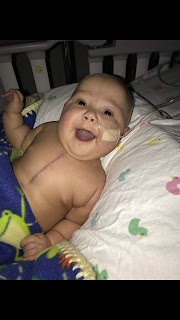 The next morning the hospital released me, they probably shouldn’t have that soon, but thank god they did! And I got down to my baby the fastest we could. When Emmett’s daddy, my mom and I got there we were told Emmett is very very sick and that if the kangaroo crew wouldn’t have gotten to him with the medicine he needed (Epi) to keep his hole from closing, he might not have made it. So Texas Children’s Hospital saved his life!

They told us Emmett has HLHS, Hypoplastic Left Heart Syndrome, Double Outlet Right Ventricle and a lot of other little things to go along with it. He was in so much cariogenic shock that his condition was worse. His organs took a lot of damage so before we could have the Norwood surgery he had to recover from that. They told us his condition requires a series of open-heart surgeries to give him the longest life possible with a possible heart transplant in the future. The Norwood, Glenn, and Fontan. They told us this first surgery would be the most critical one and the few days after are too.

He had his first surgery on March 22, they did a Norwood Sano but 3 days later they had to do emergency surgery for a Sano takedown and replaced with a 4ml BT shunt. After the emergency surgery he was in a better place, but still critical. His chest remained open and on the 31st of March, they finally closed it! During Emmett’s recovery time, he was intubated and extubated multiple times. And we hit a lot of bumps in the road. Eventually, we got him extubated and had a rocky rollercoaster during interstage. 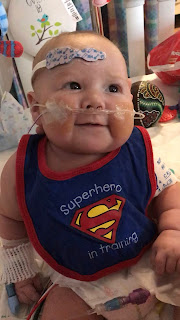 The time came and the doctors were saying he was ready for his Glenn. So Emmett was taken off to the cath lab and brought back with the news that he was not a candidate for the Glenn surgery at this time. Nothing was wrong with his heart function at all, everything looked great, there was a little bitty pinch in his arch, but no one was worried about it because the measurements were good. His lung artery vessels measured way too high and it would be really dangerous for them to do the Glenn with those measurements of the lung arteries; possibly even life-threatening. They had to start him on a medication that would bring down the lung pressure numbers so we waited weeks to give Emmett more time and for the medication to do its job and went back to the cath lab and Emmett was still not a candidate. They tested during the cath lab to see if they gave him nitric oxide if it helped bring down his lung pressures to where they needed to be.

The Cardiac team gave us three options, 1. To not do a Glenn and let him be how he is now 2. To go ahead and do the Glenn even though it’s risky, or 3. To be put on the heart transplant list. With the help of the team, we chose to go ahead and do the Glenn with nitric oxide. We were told Emmett was going to come out of surgery way sicker than he already is. The days were all thrown around on when Emmett would go into surgery but he was scheduled for August 14th, but if something was available sooner, they would take him in then. 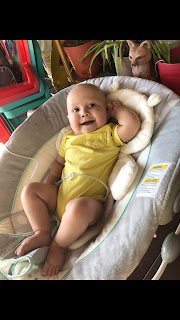 Finally, they told us he was for sure going into surgery for the Glenn on August 9th. It was a very long stressful day. When the surgeon went to take his BT shunt out, they told us it was 100% excluded!!! They said it was a blessing we took him into surgery on this day! Who knows what would have happened if we would have waited until the 14th. After Emmett came out of surgery, everyone was saying he looked great! Recovery passed and he surprised us all with how well he was doing! The Glenn was exactly what he needed for him to get better and that’s what he did, got better.

After 6 months of being in the ICU, Emmett got to go to a Step-Down floor on his 6 month birthday! There he continued to strive through his recovery! He had a G-tube placed on October 2nd and on his 7 month birthday, October 5th, and after staying at the hospital for 7 months, WE GOT TO TAKE EMMETT HOME!!! Emmett has 5 medications he takes all throughout the day and has pretty frequent appointments with cardiology, GI for nutrition, general surgery for his G-Tube, a developmental class, and physical and soon to be speech therapy! From October to now, Emmett has been the most happiest baby you could ever meet! He is truly a miracle and such a blessing to our family!! 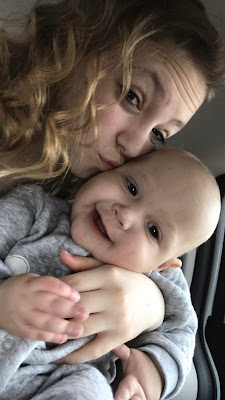