Quinoa Veggie Chili- it's vegan, too! 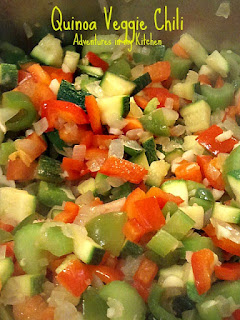 If you're following me on Instagram(SusanD86) you saw me post some tasty pics on Wednesday night. I went to my sister's house to join her, my brother in law, 2 of their other friends and of course the pups for some Quinoa Veggie Chili, Jalapeno Cheddar Cornbread and the debate. We're party animals....watch out.

My fb/instagram posts got a lot of comments- I even had a coworker stop me in the hall Thursday morning and ask if she could come to my house for dinner next time. :-) 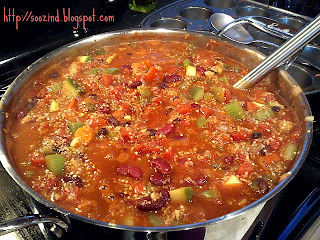 The last chili recipe I posted was for carnivores all the way. This recipe calls for many many more veggies and replaces the meat with protein packed quinoa. I feel good about getting my protein from quinoa instead of meat every now and then because quinoa is a complete protein, which means it has all the amino acids that meat has. I've been reading Born to Run by Christopher Mcdougall and he talks in length about the runners diet. He also explains the science behind a lot of things in the book such as the barefoot running craze, humans vs animals oxygen consumption, injuries, etc. etc. He writes that a vegetarian diet is the most beneficial to runners for a whole list of reasons. (I know, that was a great explanation. I should be a professional explainer of things....) Since I am training for a half marathon at the beginning of next year, and veggies are good for you (duh) I'm thinking there's no reason to test this theory out for myself. Right? 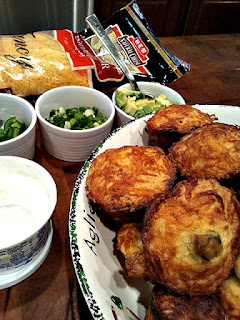 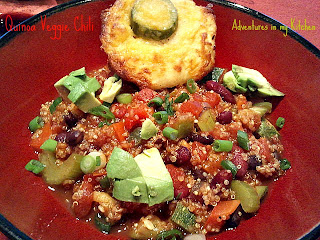 Cook quinoa by bringing 4 cups of water/broth + quinoa to a boil and then simmering until all liquid is absorbed. (about 15mins)
Chop all veggies.

Heat evoo in a very large pot and throw in the onions and garlic. Enjoy that smell while they sweat it out. mmmmm
After about 5-7mins throw in all other veggies, diced tomatoes, rotel, tomato sauce and beans. Stir and mix and stir and mix. Mix the chili powder and cumin into the quinoa. When it's completely incorporated, mix the quinoa into the veggies. Serve with cornbread, sour cream, diced avocado, shredded cheddar cheese, diced green onions, and extra jalapenos!
*This is an enormous sized recipe. I took home only some of the leftovers, and it was 2 of my lunches!
**If you want your carrots and celery softer, throw them in the pot with the onions and garlic. I like 'em crunchy
chili dinner healthy healthy living one pot dinner quinoa vegan vegetable vegetables vegetarian