November 20, 2011
Coldplay's playing. This can only mean one thing. Susan's in cooking mode.
Hey mojo, welcome back.
Seems like lately I've been running around crazy (yesterday this was literally the case) which meant there was little time to spend in the kitchen creating tasty things. I managed to get half a spiral sliced ham from HEB (and get a 12lb turkey for FREE!) so we've been eating ham.....lot's of ham.

Yesterday I participated in the Central Texas Warrior Dash. I wasn't going to do it this year, but my sister had something come up and she had already registered so I raced for her.
It was SO. MUCH. FUN. Warrior Dash is a 3 mile course full of mud and obstacles. I had no idea what to expect, but I did not expect to LOVE it like I did. It felt great and I kicked that course's a$$! We climbed over cars, under barbed wire, sloshed through several mud pits, dodged mesquite trees with their nasty thorns, dodged cactus and horse poo, climbed up a wall using just a rope, and swam through a giant mud pool just to name a few things.  I suffered a few warrior wounds to the knee and am pretty sore today, but it was all totally worth it.
So this morning after sleeping in, enjoying 2.5 cups of coffee (complete with marshmallow) and watching Food Network Live I was fully ready to commit to some quality time in the kitchen.
I started with what was an applesauce recipe, but it never became applesauce. Instead it became and apple crumble....and then I ate half of it :-)
Apple Crumble
4 small-ish apples
(I had red delicious and although they're not considered great for cooking, they worked fine for me!)
3/4 cup water
1/4 cup sugar
sprinkle of cinnamon
sprinkle of nutmeg
1 cup rolled oats
3 tbs margarine or softened butter
2 heaping tbs brown sugar
Peel, core and chop apples. Add apples, water, sugar, cinnamon & nutmeg into a sauce pan and cook on medium heat for 15 minutes. While you enjoy the aroma the apples are creating in your kitchen, prepare the topping by combining the oats, margarine/butter and brown sugar.
When apples are done cooking, place in the bottom of an oven-safe dish and top with crumble topping. Place in a 350* oven for 15-20 minutes depending on your desired crunchiness of the topping.
YUM 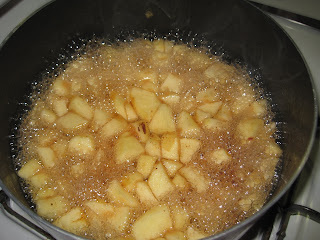 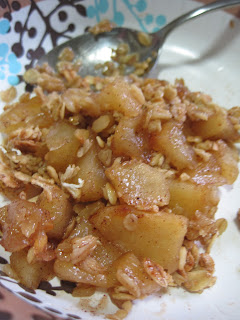 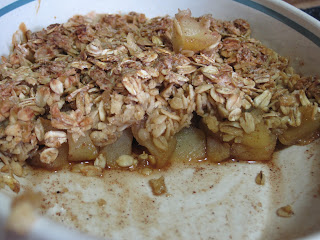 Also on the list today are:
Dog biscuits for my girls, roasted pumpkin for I don't know what yet, apple chips, sweet & sour meatloaf, and funeral potatoes.
Am I the only one who has very specific cooking music? -
I don't know what it is, I just put all the Coldplay I have on shuffle (I'm pretty sure I have everything they have ever recorded, thanks to bf) and then I zone and cook. It's just relaxing.
apple crisp warrior dash