This month I will be sharing the stories of families who have had Heart Babies at Texas Children's Hospital. I hope to spread awareness for all CHD's and to give hope to newly diagnosed families. My first story comes from Courtney, Momma to Connor, who was diagnosed with Truncus Arteriosus type 2 as well as 22q 11.2 deletion syndrome. 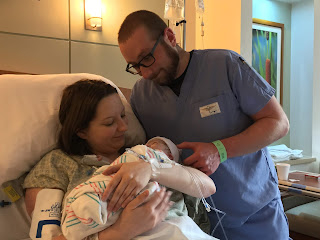 Hello, my name is Courtney. I’d like to tell you that our story isn’t full of sadness depression and only hope, positive thinking, and strength but that’s not how this story goes. Instead, this story is full of all of those things woven together. Though, like in most great stories, there is a “happy ending”. I am many things: a daughter, a spouse, a registered nurse, a lover of literature, good food, and “binge-worthy” series. Out of all the things I am my favorite is that I am a mother to a very special little boy! My son, Connor, was born at Texas Children’s Hospital on 01/17/2017 with a chromosomal abnormality called 22q 11.2 deletion syndrome. A fairly common condition that can cause 180 different health manifestations one of them being heart defects. Connor was born with Truncus Arteriosus type 2. He was prenatally diagnosed with an uncertain heart defect at our twenty-week anatomy scan. We were both terrified and heartbroken at the same time. After the 22q diagnosis from an amniocentesis, we decided to transfer our care from the small town hospital we were currently receiving care to Texas Children’s Hospital. My spouse, Matthew, and I both felt that TCH was going to give our son the best possible chance at life!

Connor did really well until he was ten days old his condition deteriorated and he had to be intubation. I will never forget getting that call at 2:00 a.m. It was one of the many times I thought that I would have to tell this sweet little baby, whom I hadn’t gotten a chance to really know, goodbye. He had his first open heart surgery at two weeks old. It lasted eleven hours The thought of losing him combined with the idea of not being able to the normal “baby” things with him brought me into a depression. My emotional state could only be described as zombie-like on an emotional roller coaster. I went through every day thinking that this was my last day with this little baby. I did my best to try to hold it together but I was failing horribly. Matthew and I both had twelve weeks off from work so we were able to stay close to Connor. We slept in hotels, bedside chairs, bedside couches, both in the hospital Ronald McDonald House and down the road Ronald McDonald House. It was at times chaotic not always knowing where we were going to sleep but we were committed to not being far away from Connor. 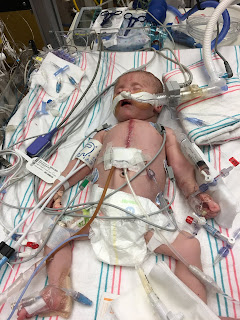 Back then I felt a lot of resentment for the people in my life having average healthy children. I couldn’t relate to their problems that seemed so small and trivial and they most definitely couldn’t relate to mine. To honestly tell the truth most of the time I still cannot relate to the average parent. The resentment, though, has lessened. Nobody gets to choose the hands they are dealt. Connor stayed hospitalized until he was seven weeks old. Most of his recovery went smoothly except for feeding difficulties and for that, I know we are extremely lucky! 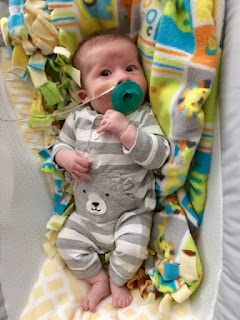 Connor came home with an NG tube and stayed on it until he was four months old. Until Connor turned fourteen months we did not take him anywhere except doctor appointments for fear that he would get sick. It was hard and lonely at times. When Connor came home the depression for me did not go away. I obsessively thought about our experience every hour of every day. I cried A LOT. I could not shake the feeling that Connor would soon die. It affected every aspect of my life but life demands to be lived so as Connor healed and grew so did I. It been a journey, I think, for all of us. He is two now and life is super busy! Both Matthew and I work full time (him four 12 hour days week and me three 12 hour days a week) we are luckily able to self-schedule so I have been able to attend every appointment. Unfortunately, that also means every week is different for me. On the days we both work my mother in law is able to watch Connor. Speaking of appointments Connor has a lot! Due to his 22q, he sees a lot of different doctors. He sees cardiology, immunology, pediatrician, developmental pediatrician, audiology, ENT, gastroenterology, endocrinology, neurology, psychology, orthotic specialty, and high-risk dentistry. He has had ear tube placement, dental surgery to remove four front teeth, four failed hearing exams, a sedated ABR, two swallow studies and of course lots of echoes! He has speech therapy once a week for speech delay, occupational therapy once a week, physical therapy once a week for pronation of his feet (he will soon be wearing braces) all about fifty minutes away from our home. He has an ECI in home teacher that comes twice a month and a in home dietitian that comes once every two months. Like I said life is busy! 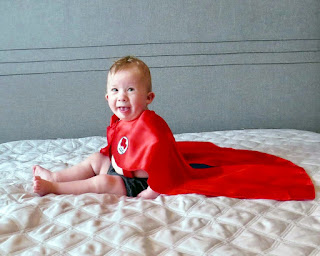 His list of diagnoses is long with a recent diagnosis of Autism spectrum disorder. We are big advocates but I try to give him an average childhood! He loves Disney movies, light up musical toys, swimming, and playing outside. He is a mixture of sweetness, silliness, and mischievous! He runs around and gets into everything just like any other two year old. He has been lucky enough to not have to be hospitalized again since his birth. His second open heart surgery is on the horizon but hopefully, we will get another year or two before that is needed and has not needed any other cardiac interventions. 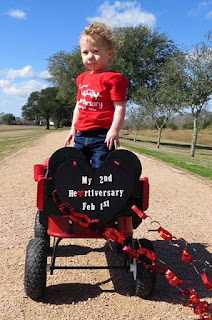 I would like to say how lucky to have such a good support system. I am so thankful for Matthew for being there for me and for Connor he never left our side. Some days are really crazy but when I look at Connor I know that I am the luckiest person in the world to be his mom! See I told you it had a happy “ending”. 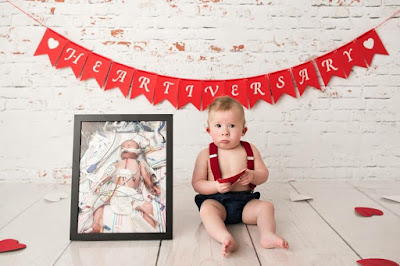