Today's Heart Warrior is Michael! He's the son of Johanna and Bill. Johanna and I met in a class held at Texas Children's Hospital called "Hospitalized Newborns". I'm so grateful to have met other families that would be walking alongside us before our babies were even born! Johanna's story touches on something that is important for ALL heart families to remember- you did not do this. This is not the result of something you did, or did not do during pregnancy. Why this happens is unknown, and that's why CHD research and funding is so crucial!

I am the mother of a child with a congenital heart defect. Our story starts at our anatomy scan in late April 2017. 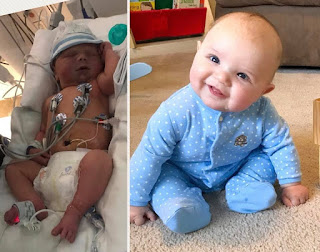 I'd been looking forward to the scan since it was scheduled weeks before. That morning, I made sure to eat the right stuff in order to get the baby to cooperate. My husband and I had agreed to leave the sex as a surprise since this would likely be our last baby (we have a 2y old son). During the scan we laughed and made jokes, my husband begged the tech to give us clues to the sex. Then the doctor came in and looked at the baby himself. After a few minutes he said to us, “I’m having a little trouble getting a good look at the baby’s heart” (my mind thought ok no big deal, baby isn’t cooperating, we’ll come back). But he went on. “The baby is turned towards your back and the ribs are casting a shadow, but there seems to be something significantly wrong with your baby’s heart.” I didn’t hear anything else he told us, it was like a black veil was pulled over my head and all I could do was try to breath. I finally asked if it was something I did? Because I had some wine on my vacation? Because of Zika? He assured me no, that this happened before I even knew I was pregnant. I felt responsible... devastated. I asked if he could be wrong, and he told me, “there’s a possibility but I’m pretty sure.”
I work in the same building as my doctors office. When I returned to my desk after the scan, I started to sob uncontrollably. What did this mean for my baby? What would it mean for my family? Would my baby even survive outside of the womb?
A nurse from Texas Children’s Hospital called me shortly after to set up a cardiology appt including fetal echo. Luckily I only had to wait 2 days. At our echo, I prayed and prayed and prayed that the doctor was wrong, that they would tell us “seems he made a mistake, everything is perfectly normal with you baby’s heart.” Unfortunately, they told us our official diagnosis. My baby had Transposition of the Great Arteries. His pulmonary artery and aorta were switched, so blood from the body went back to the body while the blood from the lungs went back to the lungs. The baby would need surgery immediately after birth in order to survive, but after the surgery we would have every chance for a normal life - and no other planned surgeries. 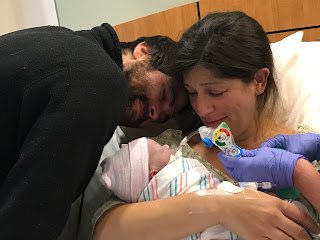 The rest of my pregnancy was really hard. I was switched to a (great) obgyn at TCH and labeled “high risk”. At one point my baby developed fluid around the liver, then I had too much amniotic fluid in my belly. And then it seemed every scan they found more wrong with the baby- a VSD, a bicuspid aortic valve, a coarction of the aorta. I felt hopeless. I was scared for every appointment. I was so sick of hearing what was wrong with my baby.
When Hurricane Harvey hit, I was 38 weeks pregnant. I decided to stay home with my family and pray that I didn’t go into labor. It was a long few days but we made it out unscathed. My mother was finally able to make it to Houston to help out with my 2yo after a number of cancelled flights. Looking back, it was actually nice to have time with my husband and first born, alone with no agenda, to enjoy our family one last time before we welcomed our second baby, especially not knowing what it would entail.
I had a scheduled induction on 9/5/17 at Texas Children’s Pavillion in Houston and a pretty straight forward delivery. My husbands was still able to call out the sex and at 6:48pm we welcomed our second son, Michael Thomas. He came out crying and pink but almost immediately turned a deep purple/blue. He was taken by a team to be assessed and they intubated him. When he was more stable, they let me hold him. I’ll never forget the sound of his cry or how soft his skin was.
My husband went with Michael to the NICU where they immediately did a bed-side balloon septostomy to allow for more blood mixing. While they were there, I was alone in my room trying to eat a meal and waiting for my epidural to wear off. My friend who is a CVICU nurse came and sat with me for a while until my husband came back and wheeled me to see our son. 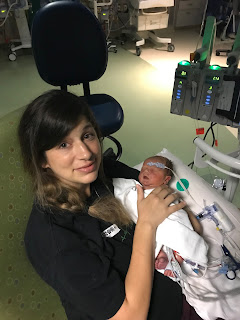 For the next 5 days, Michael stayed in the NICU and the teams ran their tests. I was able to hold Michael twice during that time. On the 6th day, Monday September 11, Michael was wheeled off with his team of surgeons and anesthesiologist for his arterial switch operation. During his surgery, the Physician Assistant would come in every 1.5 hours to give us updates: he’s on bypass now, they’re getting ready to do the switch now, they are deciding whether or not to fix his arch now, they’re getting ready to take him off bypass and close him up. Finally, at about 3pm, our surgeon came and told us he was happy with how the surgery went. We were able to see him a few hours after that. He looked so small and helpless but so pink..
The next few days were the hardest for me. He was still intubated and was having bloody secretions in his breathing tube. There were extra chest X-rays ordered and talks of atelectastis and lung consolidation. Our doctors were amazing and kept telling me, as I struggled to hold back my tears, that it’s not a question of *if* but *when* he’s getting off the ventilator. It was very hard to stand beside him not able to do anything but touch his hand. Finally 3 days later, he was extubated. And that’s when my husband held his son for the first time. 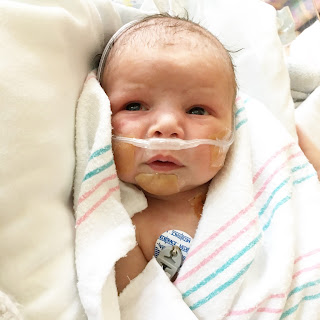 After that, the rest of our stay went very fast. Every day we came in there was another piece of equipment removed, one less IV, one less monitor. When we went to the “floor”, we were able to get a taste of what life was supposed to be like with a newborn. I was able to hold him for as long as I like and as often as I wanted. I was able to try to nurse him.
And finally on post op day 10, we were discharged home. We left on two medications but those were quickly discontinued after our first surgical followup visit.
Since coming home, I’ve been able to exclusively nurse Michael. He is hitting his milestones and gaining weight well. I struggle with anxiety, with letting him be a normal baby. My heart hurts for everything that Michael and our family have been through. But we are healing like he is, getting stronger every day. We have had two followup cardiology visits since being discharged and his visits are beginning to be spaced out further since he’s doing well. 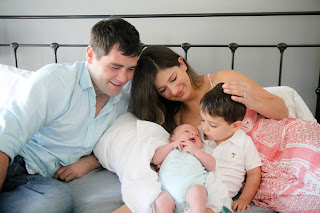 Being a heart mom is not a club anyone wants to be a part of. My faith and sanity were tested every step along the way. There were nights I would plead with God to help my baby, and I pray for his health every day. Looking back I can see how truly blessed we are. Michael was the missing piece to our family’s puzzle. Our hearts are so full and our family is closer than we have ever been. We have a new appreciation for life and for each other. Normal struggles take on new meaning: I'll  never complain once about the lack of sleep or having to wake up with my baby. I'm glad we have these problems! Because it means he is home with us being a "normal" kid.
1in100 CHD CHD awareness TCH Texas Childrens Hospital TGA Transposition of the Great Arteries