February 01, 2012
Sometimes I make up fake deadlines for myself and then of course have a minor panic attack when said "deadline" approaches and I realize I am not going to make it in time.
Take Food for Fuel for example. I decided that I would post these on the first of the month, no one else. How many of you woke up this morning and thought "Welp, today is the first, wonder what vegetable I am going to learn about this month!?"...... *crickets*...... yea, some day I may have a life :-) But for now I bring you a plethora of awesome vegetable knowledge!!!! Ladies and Gentlemen (though I know it's mostly ladies) I bring you......

BEETS!
Time for me to nerd-out and then I'll tell you all the wonderful things beets do for you. Readysetgo!
The beet which we all know today is the ancestor of the wild beet. The wild beet is believed to have grown in North Africa and along European and Asian shores. The wild beet is also thought to have originated in prehistoric times... so, it's probably safe to assume that the dino's ate beets. Hey, if the dino's did it, we should too, I say!
In early history only the greens were eaten and the roots were thrown away. (wha!?) The ancient Romans were the first to get it right and grow beets for the roots. The beet became more popular in the 16th century and it's value grew in the 19th century when someone figured out they were a concentrated source of sugar.
Napoleon decreed that the beet be used a primary source of sugar when the British cut off access to the sugar cane- greedy brits. Around this same time the beet was brought to the Americas and we are now one of the leading commercial producers of the beet.

Well, all that's fine and dandy, but why the H should you eat them?


umm, btw, betanin (the red color) cannot be broken down in the body. This means that if you decide that you love beets forever and always you may begin to notice a reddish hue when you, uh.... use the loo. Just an FYI.
So what should you do with your beets? How's about making a Beet Hummus? or more appropriately named, Pureed Beet Dip-Stuff. YUMM 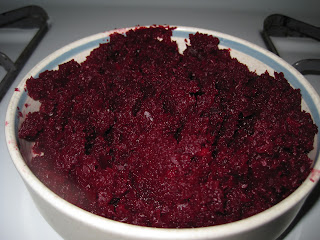 
2-3 medium beets, washed and steamed (you can peel them, but it's not necessary)
2 Tbs tahini
2 1/2 Tbs lemon juice
1/2 Tbs cumin powder
salt and pepper to taste.

Combine all ingredients in a blender/food processor and blend until smooth. CHILL and serve with crackers, sliced cucumbers, celery, etc. Or use it as a dressing in your salad.
*note* I pricked my beets before steaming, just like potatoes. Be careful if you do this, beets spit! and it's red! and it stains! Beets are done steaming when you can easily slice with a knife--kinda like a potato.....