November 16, 2011
*Caution: Lengthy post ahead*
This past Sunday I completed my first half marathon ever!
I'm not going to lie, it was hard, and it hurt. Bad.
I had experienced some pretty bad knee pain when I ran Run for the Water two weeks earlier and I was worried about that coming back. I was also worried about my foot and the injury from the spring making another appearance as well. By the 13th mile, I really thought I was going to have to crawl across the finish line. I had the most funky pace ever because my left foot and my right knee felt like they were going to fall off at any moment!

Here's the re-cap of race day:
We had come to San Antonio the day before to attend the Expo where (thank goodness it was here) I realized that I forgot to pack my sports bra! My flippin sports bra!! The only thing worse would have been to have forgotten my running shoes! Luckily Texas Running Company had a booth there with not only sports bras, but half price sports bras! woohoo!
After the expo, we headed to our hotel to check in and chill out before meeting the rest of our group for dinner. I laid out all my stuff for the next day, along with all of my food items. I brought some Powerade, lightly salted peanuts, 2 cliff bars, water bottles and the boyfriend had packed me a shaker bottle with protein powder in it (he was very concerned about my protein intake for this event, so sweet). Dinner was at an Italian place that was outside of downtown San Antonio. I had the Spaghetti Bolognese with whole wheat pasta- it was okay. Not the greatest I've ever had, but then again, I've had actual Spaghetti Bolgnese in Italy.

After dinner was really nothing special- back to the hotel, make sure one more time that everything is laid out and I have it all, then do a little stretching and go to bed. The next morning we woke up about an hour before we needed to start walking down to the finish line. We thought it was going to be a chilly morning but we were very wrong- it was cloudy/overcast and sticky humid, blech.
I ate my cliff bar as we walked down to the start- anyone tried the holiday flavors they've come out with yet? Pumpkin Spice is good, Gingerbread was only good the first bite, and I'm not brave enough to try the Peppermint one, I feel like it was taste like gum. :-/ 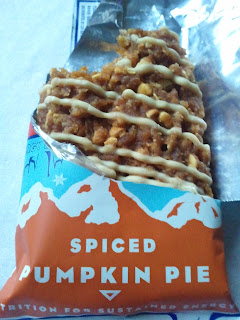 Anyway... We met the rest of our group at corral 16 so even though the start time was 7:30am, we didn't actually get moving until a smidge later. Which gave us time to do the obvious....take pictures!
And then all of a sudden we were moving up and it was start time! The whole point of the "Rock N Roll" marathon is the bands that play alongside the road and at the end. This kept the race pretty quick, going from band to band. By mile 3, however, I needed a pit stop and that's when I totally lost my mom and sister. :-( They did, however, wait for me at the Mile 11 marker and we finished together. By halfway through I was in need of some food-fuel. I had packed a snackbag of salted peanuts and at the water stop I gulped them all down together. It was just what I needed, a little protein, a little salt, a boost of energy. At another mile marker a few miles down the road they were handing out Gu packets. I took two giant handfulls- not because I needed that much right then, but to stuff in the bra for later consumption! I've never actually bought Gu's thanks to races! :-)
I'd say mile 10 is where the real wall hit- and it.hit.hard. My knee was having serious issues, my foot hated me, I was getting this weird soreness/cramp in the back of my right leg. It was uncomfortable and that's where I started taking walk breaks WAY more and longer than I wanted to. This, I know, increased my time, and I am not pleased with that but I also did not want to crawl or be drug across the finish line!
During mile 11.5-12.5 ish I had the most awkward pace ever- I probably looked like an old lady in need of a cane. Everything from my waist down felt like it has seized up, rallied together and decided to rebel again the rest of my body. It was going to find another torso to attach to, one that didn't torture it the way I had. I was fighting back tears, every step didn't feel so much like a step closer to the finish line but a painful reminder of all that runner's remorse I had been feeling the few weeks leading up to this. THIS is why I was so nervous, THIS is why I had all those doubts.
Then there it was *insert dramatic pause with appropriate music- aahhhh!* The last turn. The turn that meant all I had to do was make it up that hill -yes, hill.... that's just mean, isnt it?- and then it would all be over!
Oh, hey adrenaline, nice of you to show up......
I was able to zip up that hill (well, compared to the old woman pace I had going before, it was quite zippy) and then it was THERE! *aaahhhhhh!!!!*
I crossed holding my mom's hand, I'm assuming I smiled, but I dont really know. What I do know is that as soon as we crossed a volunteer handed me an ice cold towel for my neck and I lost it. Tears were flowing. Who knew I had any hydration left in me!? I hugged my mom and we were both half laughing half crying and we just stood there- in everybody's way. I cried cuz it hurt, I cried cuz I did it, and I cried cuz it was done.
I was handed my medal, told congratulations by the volunteer (sister, you have no idea....) and then we were herded like cattle through the tables with the post race treats.

I have now learned my official time was 2hrs 47mins.
When I got home, I propped my feet up on the couch and did not move for a couple hours. Then I made it into my bed where I was fast asleep before 8pm. :-)
My Results
race Rock-N-Roll Half Marathon running story San Antonio