November 04, 2011
Yes, Stoup- it's a technical term from Rachael Ray herself. It means Soup & Stew all at once.
This was my lunch the other day. It was ssoooo tasty! The best part about it? Someone else made it for me! 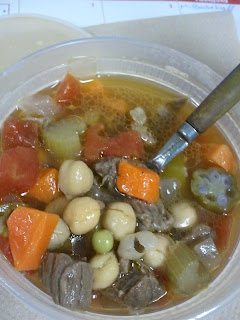 It was deceivingly rib-sticking. I did not think that this bowl was going to tide me over through the afternoon but I was pleasantly surprised! I did add in a side of steamed edamame, but quite honestly, it was not needed. After I inhaled this, I talked with the chef for quite some time on how it was created and decided to share it- cuz it's so stinkin easy and cheap!
Rebecca's Stoup
2.5-ish lbs of chuck roast, cubed
1 or 2 cans of chick peas
a bag of frozen "stew/soup" veggies- in the frozen foods section, promise
water & salt
Cook the cubed chuck roast in a pot, searing the outside then sprinkle it with salt & turn the heat down a bit (medium) to let it cook through. Make sure that the fat side is down.Once meat is cooked, add in all other ingredients. You only need as much water as you want "broth" to the stoup. Heat everything through and get your hands on some crusty crunchy garlic bread. MMM MMM MMM tasty!
ground beef soup stew stoup vegetable