September 24, 2011
I have really come to enjoy the nights when the bf says "don't worry about me for dinner, do whatever".
Last night was one of those nights
I didn't have any meat thawed, so I decided to have a meatless dinner. I had plenty of veggies that were in need of being eaten, so here's what I came up with:
Quinoa Stuffed Pepper & Roasted Garlic Cauliflower 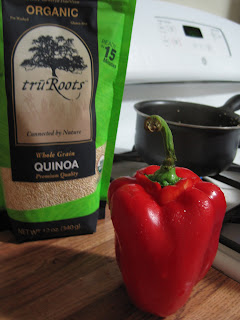 For those that have never had Quinoa (keen-wah) here are some quick facts:
It's a seed, it has tons of wonderful protein and good carbs, the taste (to me) is almost like a mix of couscous and brown rice, it's super easy and fast to make, you can flavor it with anything!
Quinoa Stuffed Pepper
Cut the top off of one red bell pepper (just like a pumpkin) then seed and wash it. Place it in some boiling water- sans top- until it is just al dente (if peppers can be al dente).
Meanwhile, simmer 1/2cup quinoa in 1/2 cup of water and 1/2 cup of low sodium chicken stock for 15 mins, then turn off the heat, fluff the quinoa and let it sit. (when you see some little tails sticking out of the seeds, it's done)
When the pepper is done getting all al dente, remove it from the water and grab some shredded parmesean cheese. Stuff the peppers using one spoonfull of quinoa, then one pinch of cheese and repeat this until it is nice and full. Let sit for a min, to let the quinoa and the cheese become friendly.

Roasted Garlic Cauliflower
Preheat oven to 400*
Wash and Chop one head of cauliflower, then get as large ziplock bag and fill it was the cauliflower, drizzle in some evoo and a healthy dose of garlic powder. Close up the bag and shake it!
Spread cauliflower out onto a cookie sheet, drizzle with a tad more evoo, sprinkle with some salt and throw in the oven for about 20-25mins. 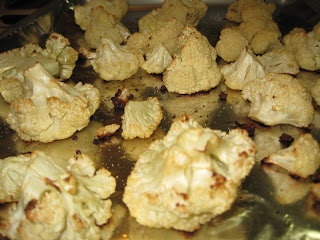 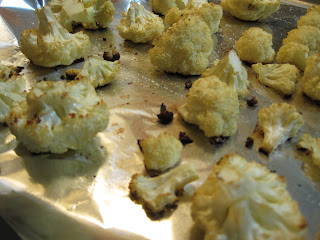 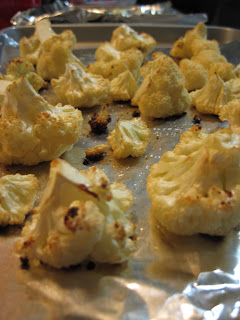 I may or may not have eaten the entire head of cauliflower......don't judge, it's too good!


Fun Facts about Cauliflower:
It comes in white, orange, green and purple, it's high in dietary fiber, folate, water and vitamin C, & it's a good substitute for potatoes on a  low carb diet.


The saltiness from the broth the quinoa was cooked in and the cheese blended so well with the sweetness of the pepper. I only used half the quinoa to fill one pepper, then I ate the rest by itself. So yummy.
cauliflower cheese dinner meatless parmesean pepper quinoa roasted